Alexander Solotzew was born into a celebrated artistic family in Kaliningrad, Russia (formerly: Königsberg). His father was an art professor and his mother a teacher at Tambov Art college. Having parents whose emotional and psychological makeup were seated in the arts gave Alexander his artistic DNA.

From the age of 11 to 15, he attended the Moscow Academic Art Lyceum for gifted children, an educational institution of the Russian Academy of Arts, where acceptance was not considered unless one demonstrated the talents of what the jury deemed "a gifted child". There, Alexander begins to explore his attraction and eventual gravitation toward artists such as Vrubel, Serov, Botticelli, and El Greco.

After the graduation from the Art Lyceum he had enrolled into Tambov Art College where both his parents taught art. He began his rigorous artistic training from daylight until late hours in the night, perfecting his techniques and absorbing the methods of early and contemporary masters. Here Alexander started developing as an individual and a unique artist with a style all his own.

In 1977 Solotzew was admitted in the renowned St. Petersburg State Academy of Painting, Sculpture and Architecture. He continued to focus on perfecting his knowledge and techniques and emerging even more deeply into the artistic world that would dominate his life. 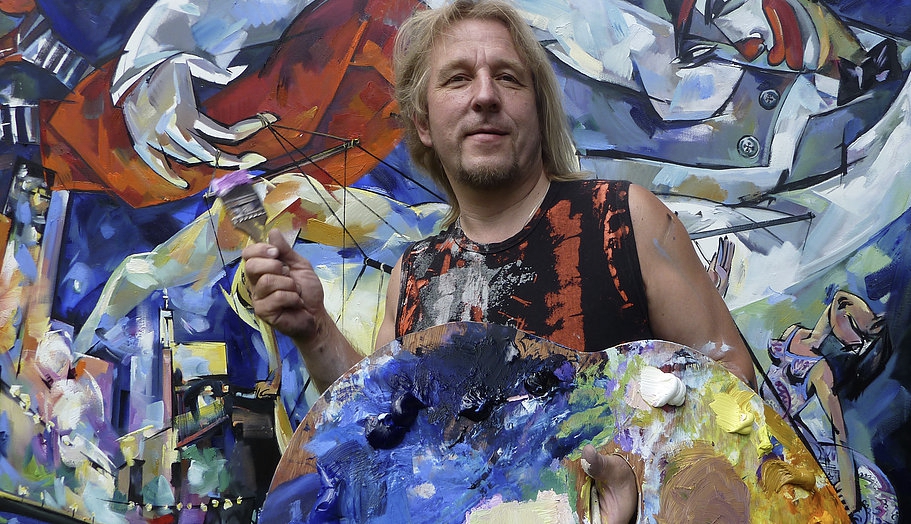 Although Alexander left Russia and immigrated to East Germany in 1981, his artwork, nonetheless, remained saturated with images of his homeland and its folklore.

Solotzew had a new beginning in 1989 with his move to Landau Pfalz in Germany. It became for him the launch pad for what was to become part of a new vision and purpose for his works. His rise to the top as a celebrated artist was rapid by German standards when in 1990 he became a member of the Rhineland-Palatinate Professional Association of Artists in the Federal Association.

By 1991, the Artist’s popularity in Europe forced the creation of a new studio in Villa Streccius in one of the most historical and cultural buildings in Landau, Pfalz. There, Alexander created many of his famous paintings. Summers were spent in the famous village of Lacoste in Provence, France where he would seek additional inspiration like the masters of past generations who were fascinated with "The Light of the South" as well.

1997 -  Alexander Solotzew was recognized for his cultural contributions to the Harz Region by being awarded the highly reputed Kunst- und Kulturpreis (artistic ordination) of the city Wernigerode.

2001 - The artist performed a solo exhibition in the State Chancellery of the regional government of Rheinland-Pfalz.

From 2008 Alexander has been collaborating successfully with the Russian State Museum (St. Petersburg) and also was commissioned to create artworks for the renowned international shows organized by the Museum, working closely with the director, Joseph Kiblitsky.

Mr. Kiblitsky shared some of his insights about the Artist: "As the Publishing Director of Russian State Museum and Director of Ludwig Museum, and knowing very well the creativity and potential of Alexander Solotzew, I would characterize him as an artist with exceptional talent and ability who is widely recognized throughout Europe. This artist has developed a strong fan base and he has amazing prospects. I have been very delighted with the work I have seen from him, and eagerly anticipate his future masterpieces. I believe that the art of Alexander Solotzew should be in the museums around the world."

Solotzew's reputation as an “artist par excellence” has earned him high praise among the established elite of fine art critiques of Boston and New York as well as the fine art historians in Europe.

In 2009 Alexander's unique and creative artwork was recognized in the United States which led to the invitation from the Director of Mosaic Fine Art International Inc. And in 2010 the Artist was offered a position of the Director of Fine Art Publishing and became a member of the jury committee in charge of art selection from Eurasian continent for Mosaic International Inc.

Solotzew has been diligently working on various themes which bring his inspirations to Life: Russian Ballet, Circus, People and Puppets, Sky is for Mozart, Angels, Jewish Wedding, Tango in Paris, Cuban Salsa, Carnival in Venice, Torero, Nudes on Red, Fields of Provence, Florida and many others.

His artworks have been acquired by private collections all over the world: United States, Germany, Italy, France, Switzerland, Netherlands, Canada, Russia and Costa Rica. Some of his works is on display in renowned international museums.